We haven’t directly interviewed Director of Operations Amy yet, but we’ve seen a little bit of her on the blog in the past. Here’s her food tour love story.

And if you’re looking to cement a food tour love story of your own, don’t forget to get your honey a food tour gift certificate for Valentine’s Day!

You had an interesting career path. How did you end up working for a food tour company?

In the Spring of 2006 I found myself suddenly single in NYC. To fill my spacious Saturdays I decided I needed a new hobby. 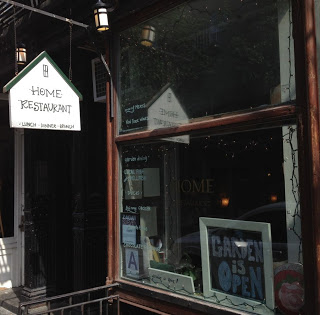 I was working at New York University full time as a Career Counselor when one of my co-workers performed some after-hours career crisis counseling on me in an effort to find my post-work passion. Late at night in a dimly lit office, she reminded me of my insane love for NYC and of my strong family history with its Shop Life.

I needed to fill my weekends with love.

And there is no better boyfriend, no more charming chap, no more consistent companion, than The City itself. So I became a weekend tour guide in 2006 and loved every moment of it.

I loved it so much that two years later I had an unexpected career change: I quit my day job (except for my Adjunct Teaching at NYU) and starting working full time (behind the scenes) as the Director of Operations for Foods of New York Tours. And I never looked back.

How did Foods of New York Tours help you meet your significant other? Tell us the story.

I’m a romantic. My boss Todd, the owner of FNYT, often says that I romanticize everything. And NYC — with its MOMA and the Met and its italianate style cornices and corinthian columns — is an easy place to find romance, even if solely in our architecture.

And so it was no surprise that I also looked for love and romance when giving tours. I often hoped that one of those Wisconsin women or Louisiana ladies would offer to fix me up with her Brooklyn-based son. But that never happened.

One cool November night in 2010, while making my rounds in the neighborhood and dropping off our food orders for the next day, I stopped in to chat with Chef Carey at a sweet little spot on our Greenwich Village Tour called Home Restaurant.

This was always my very last stop of the day, since I conveniently live right across the street from the restaurant on Cornelia Street. I noticed that behind the bar was a seemingly smart and somewhat offbeat guy who, although he had worked at Home part time for 10 years, I had never seen before. 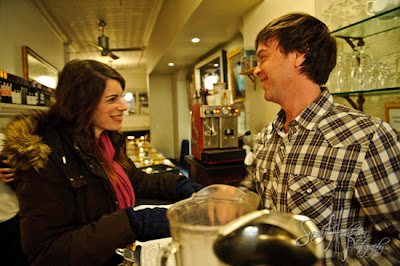 It was an instant connection and palpable chemisty. There was no rhyme or reason in my head, just something in the air. In the timespan of my 5 minute visit, Tim quickly shared with me (and wanted me to know, I suspected) that he not only worked at Home, but he was also a later-in-life (Tim is 42 and Amy, 38) college student — a fact that greatly intrigued the career counselor in me. Tim wanted me to know that he was more than what I saw behind the bar.

The next day, I was making my rounds and saw Chef Carey again on Cornelia Street on her way to Murray’s Cheese Shop to pick up some items for the evening’s menu. She asked if Tim could have my number. Before she finished her sentence I said yes. One date, and the future was essentially sealed.

Tim and I had spent the last 5 years in the very same neighborhood but due to our differing schedules, never crossed paths until that night.

What does he think about FNYT and your job here?

He loves it! In fact, my deep romantic love for NYC and for my job with FNYT has actually inspired Tim to find his own passions and to select his career path with care.

Tim has since finished his BA degree in Art History and History and his Masters is now underway at Queens College in Library Science. He loves libraries and books and art and hopes to find a job at the New York Public Library or one of NYC great museums working with archives and preservation of materials.

He’s currently working at a hidden subterranean library only accessible from underground, just off the 6 trai